We have elected another president nearly half of the country. The other half the person is not who they hoped for, and it was a major upset in political history. The United States elected Donald Trump, president. President-Elect Trump won 279 electoral votes and 59,695,628 popular votes. Sec. Hillary Clinton won 228 electoral votes and 59,920,291 popular votes. There are still where states where the race is too close to call. 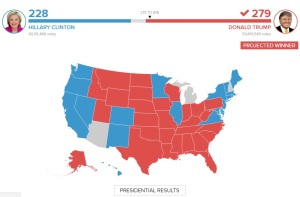 As a progressive Democrat, I was proud to have voted for Sec. Hillary Clinton and I am deeply saddened by the results of this election.

Immediately following the announcement that he had enough votes to take the electoral college, I needed to find answers to how this happened. Thus, I started running through the exit polls and election results in the battleground states.

Additionally, I looked for information for other sources who know a little more than me about elections to see what they thought. Here is what I found out.

Throughout the nation there seemed to be a racial backlash against Barack Obama and the racial and gender power shift that Obama and Hillary represented. This was seen in the new numbers of rural white voters that showed up at the polls (Walsh).

Furthermore, when you look at the demographics of the vote minority votes from the African Americans dropped from 13% in 2012 to 12%, while others such as the Latino vote went up from 10% to 11%. However, the youth vote remained the same at 19% (Borosage).

However, Hillary had a Democratic firewall. How could that fall? Here is how that happened. In Michigan, 57% of the voters that thought trade cost jobs voted for Trump. This means that those opposed to trade policies such as the Trans-Pacific Partnership favored Trump. This was the same for states like Pennsylvania and Ohio (Borosage).

But, she still had all those Democrats voting for her right?

From here you can move to the results, and the map makes a little bit more sense. Look at Youngstown, Ohio, and President Obama won by 20 points in 2012, this election it was a draw. Trump even won many of the traditionally Democratic and industrial towns along Lake Erie. Counties that went for Obama in 2012 went for Trump by 20 points (Cohn).

North Carolina, was perhaps a different story, there might have been voter suppression. Yes, the NAACP won their case to the federal appeals court on the state’s draconian restrictions that the legislature imposed. Nevertheless, the state and local elections officials were left up to making a decision on where to put polling locations and how many to have. They decided to eliminate 158 first-week early-voting polling places in 40 counties (Walsh).

Moreover, progressives did not lose everything. There were many wins for progressives. Just look at the state level. In many states, such as California, Nevada, Washington, Colorado, and others, they all passed progressive ballot measures. However, first let’s look at the results of the Senate and House elections.

In the Senate, Democrats did not gain control, but we did pick up two seats from Republicans. This means that it will make it hard for them to get a 60-vote majority to do many of the things Trump wishes.

In the House, Democrats again did not pick up enough seats to win a majority. However, they did pick up several seats from Republicans.

The following are ballot measures that passed in the states that are progressive wins for Democrats.