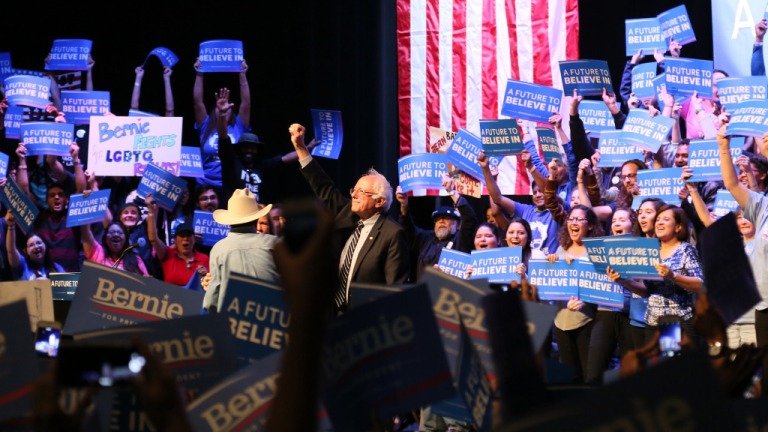 Here is why I support Bernie over the other candidates:

Bernie knows that we must build a movement to transform our nation’s politics to take the power away from the millionaires and billionaires and return that power to the working-class people.

The truth is that the powers that be. They are so powerful, they have so much money, that no one person, not the best president in the world, can’t take them on alone. The only way we transform America is when millions of people together stand up and fight back. – Senator Bernie Sanders

Bernie has made it clear that he plans to emphasize the importance of building political power outside the established channels of power. He has done this by giving a platform to activists such as Destiny Harris. Destiny is part of the No Cop Academy campaign, which aims to prevent the construction of a $95 million law enforcement training center on Chicago’s Westside. The No Cop Academy campaign argues that the city already spends far too much on policing and that the money should instead be spent on youth and community services.

Further, Bernie is the only candidate who understands that the only way to change the status quo and combat the plethora of problems we face is through a mass movement of ordinary people who exert their own pressure on politicians. This can be done in a variety of ways: strikes that kill profits or disrupts the normal functions of society, disruptive mass protests, media campaigns that create new moods in the electorate and threaten politician’s careers.

Bernie’s campaign is the only one that has text-banked his supporters to turn people out in support of the United Electrical Workers (UE) Local 506 strike last month. Bernie knows it’s all about building the muscle of the working class to take on the struggles that lay ahead.

Bernie is the only candidate that recognizes that we must develop a global movement against the unaccountable state and corporate power. He also believes that we must build this movement to take on the capitalist elites, authoritarianism, and to fight for civil rights and liberties.

To effectively oppose right-wing authoritarianism, we cannot simply be on the defensive. We need to be proactive and understand that just defending the failed status quo of the last several decades is not good enough. In fact, we need to recognize that the challenges we face today are a product of that status quo. – Senator Bernie Sanders

He also understands that we must build solidarity with the working people across the globe to collectively fight against corporations destroying the planet; against political corruption; against trade policies that increase corporate profits while devastating the lives of working people; and against the acceptance of the world’s $1.7 trillion annual military budget, much of it the United States. 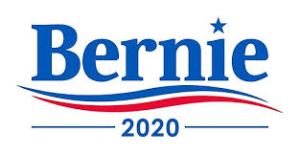 Therefore, Bernie is the only candidate who sees the class war raging, and who wants to build the working-class forces to fight back. He has consistently stood up for the working people against capitalist interests. No other candidate has a comparable track record of fighting to put people over profits.

Additionally, I support Bernie for President because he will and is presenting the most ambitious and comprehensive program to make the country more equal, more democratic, and more humane.

As a feminist, I back Bernie because he will fight for quality universal health care (through Medicare for All), child care, and education. I believe that electing a woman as President will be a historic milestone, but the policies of Bernie will materially transform the lives of hundreds of millions of women and people of color.

As a transgender woman, I support Bernie because he has been the most consistent in his support of human and civil rights for LGBTQIA+ people and he has been a supporter long before it was politically expedient to do so.

For example, during Bernie’s first run for elected public office in Vermont, he was an outspoken ally of the LGBTQIA+ community. In his platform, he proposed the abolishment of all discriminatory laws pertaining to sexuality. Later in 1983, after he was elected mayor of Burlington, Vermont, he backed the city’s first-ever pride march. He also supported non-discrimination protections.

In the 1990s, Bernie voted against a number of anti-LGBTQIA+ legislation including the Clinton Administration’s “Don’t Ask, Don’t Tell” military policy that banned openly LGBTQIA+ people from serving and the Defense of Marriage Act (DOMA) that prohibited the federal government from recognizing same-sex marriages. He also voted against an amendment that would have prevented same-sex couples in Washington, D.C. from adopting children.

Furthermore, in 2009, he voted in favor of the Employment Non-Discrimination Act, which would have prohibited workplace discrimination. And in 2013, he co-sponsored the Uniting Families Act, which would have allowed partners of any legal U.S. citizen or resident to obtain lawful permanent residency. Bernie even supported marriage equality and adoption rights for LGBTQIA+ couples back in the 1990s, way before it was politically expedient to do so.

More recently, Bernie was an original co-sponsor of the Equality Act, which would amend the Civil Rights Act of 1964 to ban discrimination based on gender identity and sexual orientation.

Specifically, on transgender issues, Bernie has been a long supporter of transgender equality. He has called for requiring police departments nationwide to adopt policies ensuring fairer interactions with transgender people, especially transgender women of color and introduced a criminal justice bill that would address these issues. The bill would also reduce mandatory minimum sentences and strengthen re-entry programs for prisoners returning to the community. The bill would also abolish private prisons, revive the federal parole program, and end the “bed quota” in immigration detention.

The bill was lauded by the National Center for Transgender Equality with Executive Director Mara Keisling state:

Though it would likely not see passage in this Congress, this bill represents, a principled stand against America’s crumbling criminal justice system. By stopping the practice of profiting off prisoners, this bill helps restore respect and dignity to all people behind bars. – Mara Keisling

Bernie has called out Trump several times for attacking transgender people and rolling back our rights.

Mr. Trump, you are on the wrong side of history. Discrimination has no place in our military or society. We must stand with trans people. – Senator Bernie Sanders on Trump banning transgender people from serving in the military.

The attacks against transgender people are part of a bigotry which has got to end. To young transgender people, I say: We stand with you. We will not allow Donald Trump or anyone else to take away your rights. We have got to continue to fight to protect and support all children in this country.  – Senator Bernie Sanders on Trump rolling back protections for transgender students.

Here is a video of me, a transgender woman introducing Sen. Bernie Sanders in Council Bluffs, Iowa during the 2016 campaign:

Lastly, I support Bernie because he vocally opposed and voted against the Iraq War, is critical of Israel, has proposed cuts in military spending, sought to terminate the U.S. nuclear weapons program, opposed U.S. support for the Saudi-led offensive in Yemen, and has expressed strong opposition to past CIA-backed coups in Latin America and Iran.

Bellow is a brief overview of Bernie’s platform: