This past year has been very exciting and challenging. Many events have taken place. Let’s begin with January.

In January, I started working for the Bernie Sanders campaign. On the campaign, I worked under a field organizer to help ensure they met all of their goals. I was working in Iowa on the caucuses where I was based in Council Bluffs and also did organizing in Harrison County.

On February 1st, Sen. Sanders won half the Iowa delegates. Iowa was a tie this was huge news for the Bernie Sanders campaign. The official results were 49.8% for Clinton and 49.6% for Sanders. Therefore, Sen. Sanders won 696.82 state delegates, and Hillary Clinton won 700.9.

Locally, Pottawattamie County, which was supposed to be a stronghold for Hillary Clinton went to Bernie Sanders, 50.7% to 49%. Further, in my precinct, Council Bluffs 11, it went 62.5% for Sanders and 37.5% for Clinton.

Bernie Sanders had a great showing in Iowa for a long-shot candidate.

Following the Iowa caucuses, I began working in Nebraska on their caucuses as a Field Organizer. During this part of the campaign, I was based in Lincoln. Thus, on the weekends I would spend my time there and weekdays in Council Bluffs organizing in Omaha and Dodge County, NE because I was still a full-time student at Iowa Western Community College. 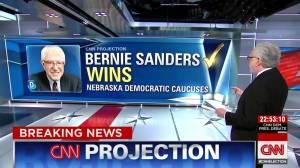 After the Nebraska Caucuses, I went back to working in Iowa, but now I was organizing the Sanders campaign participation in the County and District Conventions. We worked to make sure that Sen. Sanders would get a fair representation of the delegation he won on the night of the caucuses.

I also worked in Kansas on their District Conventions doing the same job and in Colorado on their State Convention doing similar work, but I also had the opportunity to monitor the official counting of the ballots and helped with the certification of those ballots as the Sanders, campaign representative.

Moving forward, in June at the Iowa Democratic State Convention, I ran for Democratic National Committee (DNC) member. I did lose the election. Together we won. We won at the state conventions around the nation, in California, Missouri, Nebraska, Texas, and Washington.

Even though I lost, we won, because we won enough votes to show a strong standing against the party establishment demonstrating that we want change.

Specifically, at the Iowa State Convention, we passed one of the most progressive Democratic State platforms.

The convention even agreed to a plank calling for the abolishment of superdelegates.

It was an honor to have volunteered and been a staffer for Senator Sanders. Together, we began a revolution to transform American politics and that revolution continues. We fought and are fighting for a government that works and represents us all, not just the one percent.

However, moving to Iowa City wasn’t all fun because a couple of things happened after I got here. I received terrible news of a friend passing away. Her name was Pauline Beck.

Pauline was a great person who would do anything for the people she loved. She even had an impact on many lives by her generous heart. She was a friend to many and was like a mother to others.

I first met Pauline the first day she walked into the 2016 Bernie Sanders office in Council Bluffs, Iowa. From that day forward she was in the office nearly every day. She took care of many of the needs of the office, or she would find someone who could. She provided many home cooked meals, cleaned the office, and made many creative decorations.

She is greatly missed by many.

Then we have November where Hillary Clinton won the popular vote but lost the undemocratic Electoral College vote to Donald Trump. We lost the battle but not the war.

As a progressive Democrat, I was proud to have voted for Hillary Clinton, and I am deeply saddened by the results of this election.

Even though Democrats did not win back the Senate as expected or gain more seats in the House; Democrats did not lose everything. Just look at the states. In states like California, Nevada, Washington, Colorado, and others they all passed progressive ballot measures.

Additionally, in November Blair Lawton announced that he would run for Chair of the Iowa Democratic Party and I threw my support behind him.

I support Blair for the position because of his experience working on campaigns and his ideas on how to rebuild our party. Blair believes in contesting every legislative race and spending less time courting big donors and more time building grassroots donations from activists.

On December 5, I announced my candidacy for Vice-Chair of the Iowa Democratic Party. The election will be held on January 21.

My passion stems from the fact that I know that if I want to have rights, I need to step up and fight for them.

Half of the year, I have been fighting for health insurance because the Social Security Administration decided that I am no longer medically disabled. However, the issue is that they not only want me to go to work which is fine but they terminated my health insurance, and I am left to my own devices to find health insurance. Meaning that I must find health insurance that will cover my medications including anti-rejection and cystinosis medications, which add up quickly, one of the drugs alone Procysbi cost over $63,000 for a 30-day supply.

This on-going battle with the Social Security Administration is quite stressful and demeaning. Especially because of the psychological evaluation, an enormous amount of paperwork, and calls I have endured during the last six months.

Participating in a psychological evaluation to determine if one need help through the Social Security Administration can be hurtful and demeaning especially when the psychologist has their biases against the client.

From the beginning, she was expecting a male and instead got me. On top of that, I was involved with the Democratic party.

Therefore, reading her evaluation makes one feel inferior and worthless. Specifically, in the evaluation notes, she states, “She appeared to be low average intellectual ability,” and she did this without doing any intelligence assessments. But we cannot forget how she calls me male several times.

The first part of the year was awesome I was full of hope and energy but as the year went on that energy and hope drained.

Currently, I have little hope for a better future, and my energy is draining fast. This is because of these recent events with Hillary Clinton losing, Democrats losing control of the Senate in Iowa, not gaining control of the U.S. Senate, and not to forget this on-going battle that I keep fighting with the Social Security Administration. I seem to be losing this fight, and I keep getting this feeling that hits me in the gut, it feels like I’ve already been defeated.

Nevertheless, with the hope I have, I will fight on!